I made this widget at MyFlashFetish.com.

Posted by MANIMARAN S/O RAGANATHAN at 11:08 No comments:

The Number Train - Learning for Kids

Posted by MANIMARAN S/O RAGANATHAN at 11:04 No comments:

Posted by MANIMARAN S/O RAGANATHAN at 10:47 No comments:

Sudoku also known as Number Place or Nanpure, is a logic-based placement puzzle. The aim of the puzzle is to enter a numerical digit from 1 through 9 in each cell of a 9×9 grid made up of 3×3 subgrids (called ”regions”), starting with various digits given in some cells (the ”givens”); each row, column, and region must contain only one instance of each numeral. Completing the puzzle requires patience and logical ability. Sudoku is sometimes misspelled as (Sodoko, Soduko, Suduko, Suduku).
A completed Sudoku grid is a special type of Latin square with the additional property of no repeated values in any 3×3 block. The number of classic 9×9 Sudoku solution grids was shown in 2005 by Bertram Felgenhauer and Frazer Jarvis to be 6,670,903,752,021,072,936,960 [5] (sequence A107739 in OEIS) : this is roughly 0.00012% the number of 9×9 Latin squares. Various other grid sizes have also been enumerated — see the main article for details. The number of essentially different solutions, when symmetries such as rotation, reflection and relabelling are taken into account, was shown by Ed Russell and Frazer Jarvis to be just 5,472,730,538 [6] (sequence A109741 in OEIS). Both results have been confirmed by independent authors. A great method of brain stimulation. 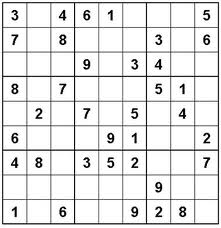 The maximum number of givens provided while still not rendering the solution unique is four short of a full grid; if two instances of two numbers each are missing and the cells they are to occupy form the corners of an orthogonal rectangle, and exactly two of these cells are within one region, there are two ways the numbers can be assigned. Since this applies to Latin squares in general, most variants of Sudoku have the same maximum. The inverse problem—the fewest givens that render a solution unique—is unsolved, although the lowest number yet found for the standard variation without a symmetry constraint is 17, a number of which have been found by Japanese puzzle enthusiasts [7] [8], and 18 with the givens in rotationally symmetric cells.
Posted by MANIMARAN S/O RAGANATHAN at 08:32 No comments: 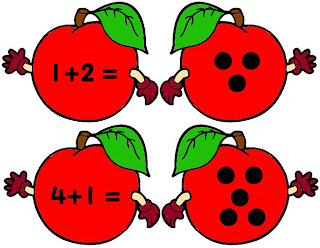 Posted by MANIMARAN S/O RAGANATHAN at 08:24 No comments: